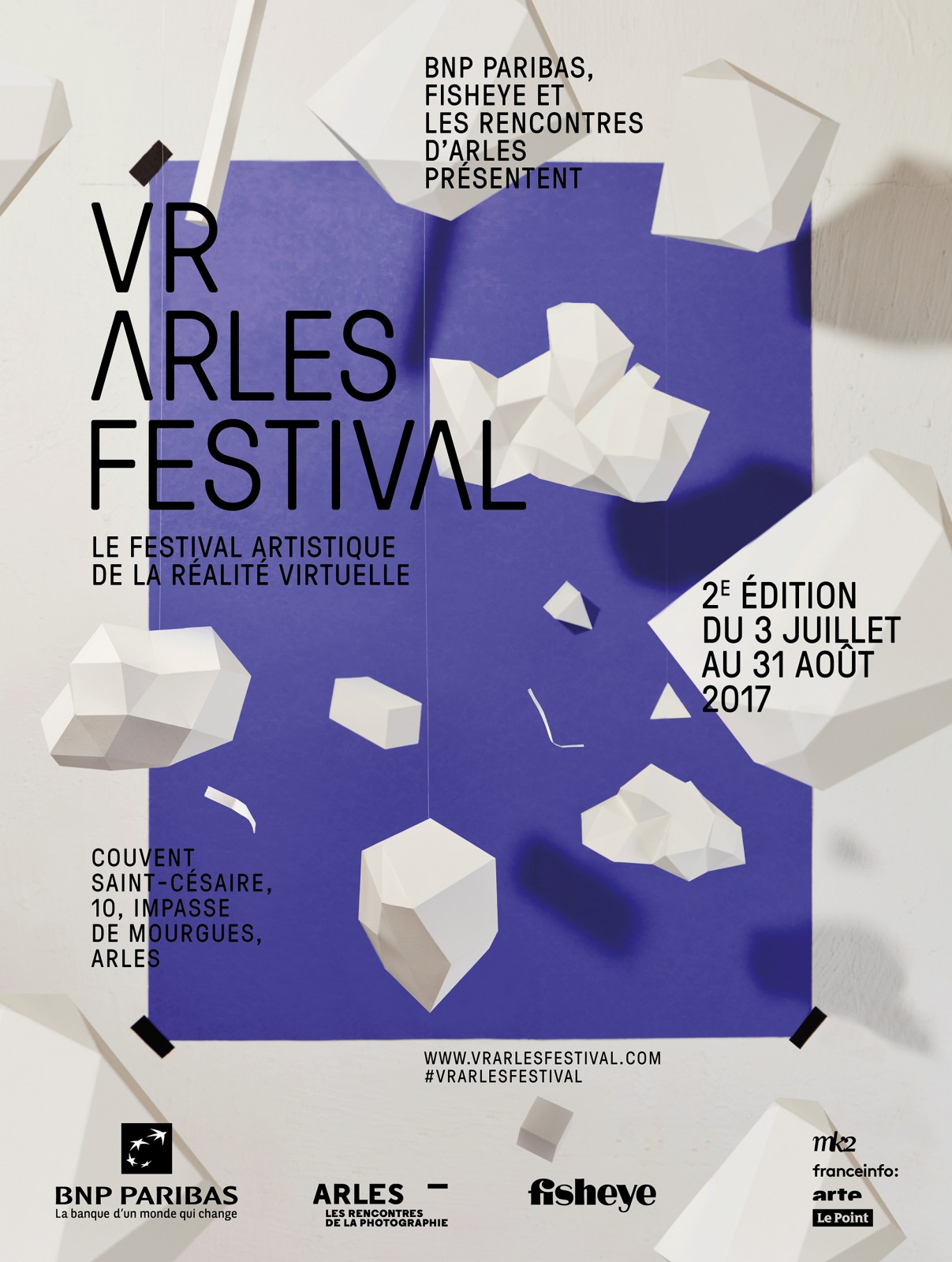 Founded in 2016 by BNP Paribas, Fisheye and the Rencontres de la Photographie d’Arles, the VR Arles Festival immerses spectators in the world’s best virtual reality productions. After the success of the first festival, this year's event will take up residence at the Couvent Saint-Césaire in Arles for two months this summer, from 3 July to 31 August 2017, as part of the 2017 Rencontres d’Arles.

From 3 July to 31 August 2017, the Couvent Saint-Césaire will become a forum for sharing and discussing VR (Virtual Reality). The public and professionals, assisted by demonstrators, will be able to use the free headsets to discover a selection of 20 VR films in three different genres: fiction, documentary and artistic creation.

Opening week, from 3rd to 9th July, will be devoted to a competition assessed by a jury that will meet at the Espace Saint-Césaire on 4th and 5th July to award a €10,000 prize to the best film in the selection.

The opening week will also feature an extensive programme of conferences, providing an opportunity for film-makers to talk to the public and consider the technical requirements of VR, the importance of adapted writing and the cinema, documentary and artistic creation of the future.
> From Tuesday 4th to Friday 7th July, at 11 am and 4 pm, Couvent Saint-Césaire, Arles.

S.E.N.S VR
2017, FRANCE, 30 MIN
DIRECTION : CHARLES AYATS, ARMAND LEMARCHAND, MARC-ANTOINE MATHIEU
PRODUCTION : RED CORNER / ARTE FRANCE
S.E.N.S VR is the first virtual reality game inspired by a cartoon strip. The player becomes a person lost in a labyrinth with strange laws. What is he looking for? Where are you going? To complete this initiatory journey, your observation skills will need to be just as good as your imagination. You will follow arrows that take many different forms, some obvious and some hidden under graphic illusions. Surprised by a mirage, carried away by a storm, flying above infinite cities, you will enjoy getting lost and finding your way back without problems, but not without questions.

NIGHT FALL
2016, FRANCE, 10 MIN
DIRECTION : JIP SAMHOUD
PRODUCTION : DUTCH NATIONAL BALLET
Enter a fascinating world where the links between dreams and reality seem to crumble. Virtual reality totally immerses viewers in the story. Night Fall is inspired by the famous white acts of Swan Lake and The Temple Dancer. This is a magical experience that will delight both seasoned ballet fans and those yet to see a performance.

KINOSCOPE
2016, FRANCE, 9 MIN
DIRECTION : PHILIPPE A. COLLIN AND CLÉMENT LÉOTARD
PRODUCTION : EX NIHILO / NOVELAB IN ASSOCIATION WITH THE CINÉMATHÈQUE FRANÇAISE IN COLLABORATION WITH GOOGLE ARTS & CULTURE
WITH THE SUPPORT OF THE CENTRE NATIONAL DU CINÉMA ET DE L’IMAGE ANIMÉE (CNC), AND THE CITY OF PARIS
Have you ever dreamed of a journey through film? Of immersing yourself in cinematic masterpieces for a while? Kinoscope invites you to experience this journey using virtual reality. Once upon a time at the cinema...

HUANG YONG PING EMPIRES 360°
FRANCE, 7 MIN
PRODUCTION : KAMEL MENNOUR / STUDIO RACHEL SEDDOH / DVMOBILE
Huang Yong Ping Empires° filmed in 360°, is the waking dream of the artist’s ideal journey through his work, guiding visitors around the largest monumental installation ever created indoors. This virtual experiment generates a string of new experiences, as spectators are transformed into invisible witnesses of their era and find themselves fully immersed in an imaginary everyday reality and in a work which, when remembered, opens up the possibilities of virtual roaming.

WE WHO REMAIN
2017, KENYA / GERMANY, 15 MIN
DIRECTION : SAM WOLSON, TREVOR SNAPP
PRODUCTION : EMBLEMATIC GROUP AND NUBA REPORTS FOR ZDF/ARTE, NEW YORK TIMES VR AND AL JAZEERA+
South Sudan declared its independence in 2011 following a bloody, decades-long civil war. Although the majority Nuba people fought with the rebels from the south, they were nevertheless linked to the Arab populations in the north. Since 2012, they have been the target of Sudanese President Omar-al-Bashir, who is leading an offensive against the rebels of the North Sudanese People's Liberation Army in the Nuba mountains. These rebels reject Sharia law and are fighting for a democratic government in Khartoum. More than 4,000 bombs have been dropped on farms, markets, hospitals and schools and tens of thousands of Nuba have been forced to flee.

NEXT NATURE HABITAT
2016, NETHERLANDS, 10 MIN
DIRECTION : KOERT VAN MENSVOORT
PRODUCTION : NEXT NATURE NETWORK
This is an immersive experience in which visitors attempt to understand our world by travelling through different environments which could one day be ours. Four scenarios – the Garden of Eden, the Hypernatural Resort, the Modernist Dream and the Techno Favela – each present an alternative view of our future world.

LES MÉNINES BY VELASQUEZ
2017, FRANCE, 5 MIN
DIRECTION : CARLOS FRANKLIN
PRODUCTION : LES POISSONS VOLANTS, ARTE FRANCE, RMN-GRAND PALAIS, RÉSEAU CANOPÉ
Diego Velasquez stares out at us from behind his easel, his expression drawing us in. We move to the other side of this painting/mirror and enter the heart of the work, sharing with the painter the sense of vertigo and the enigmatic reflections he constantly puts to use. Velázquez works between illusion and reality, taking hold of our senses and perpetually questioning our reasoning.

LE PHOTOGRAPHE INCONNU
2015, CANADA
DIRECTION : LOÏC SUTY
PRODUCTION : TURBULENT
Le Photographe Inconnu (The unknown photographer) offers an unusual experience, a surreal leap into a world populated by the fragmented memories of a First World War photographer. This virtual reality docu-drama invites visitors to take a stroll through a museum, in a dream illustrated with touching images accompanied by the photographer’s inner voice.

EXODUS
2017, SOUTH AFRICA, 9 MIN
DIRECTION : ULRICO GRECH-CUMBO
PRODUCTION : DEEP VR
Plunge into the savannah amongst herds embarking on a long, dangerous journey to beat the rains. Sit on the banks of the Mara River and witness two million wild animals making their first migration of the season. Will they make it across?

RAIN OR SHINE
2016, UNITED KINGDOM, 5 MIN
DIRECTION : FELIX MASSIE
PRODUCTION : NEXUS STUDIOS / GOOGLE SPOTLIGHT STORIES
Rain or Shine, an interactive 360° short film created for Google Spotlight Stories and directed by Felix Massie, follows Ella, a little girl who loves to be outside enjoying the good weather. But everything nice disappears whenever she puts on her sunglasses. A small rain cloud appears straight away, follows her and constantly rains on her. This short story illustrates Ella’s frustration in just wanting to enjoy her day and follows her as she tries to avoid the rain.

NOTHING HAPPENS
2017, DENMARK, 13 MIN
DIRECTION : MICHELLE AND URI KRANOT
PRODUCTION : DANSK TEGNEFILM (DK), MIYU PRODUCTIONS (FR)
It is bitterly cold on the outskirts of town and yet people are gathering, forming a row on the horizon. Something is surely going to happen. But, what if nothing does?

MIYUBI
2017, CANADA, 40 MIN
DIRECTION : FÉLIX LAJEUNESSE, PAUL RAPHAËL
PRODUCTION : FÉLIX & PAUL STUDIOS, FUNNY OR DIE
Miyubi is a comedy that tells the story of a Japanese robot - a toy personified by the viewer – given to a small boy in an American suburb in 1982. Through Miyubi’s body and conscience, viewers experience its love of their adoptive family as well as its inevitable obsolescence.

DEAR ANGELICA
2016, UNITED STATES, 10 MIN
DIRECTION : SASCHKA UNSELD
PRODUCTION : OCULUS STORY STUDIO
Dear Angelica is a journey through the magical and dreamlike ways in which we recall our loved ones. Completely hand-painted and transformed into VR, Dear Angelica depicts a series of memories unfolding around us.

ASTEROIDS
2017, UNITED STATES, 15 MIN
DIRECTION : ERIC DARNELL
PRODUCTION : BAOBAB STUDIOS
Travel through space on board the ship belonging to Mac & Cheez, an amazing pair of aliens lost in deep space and encountering serious problems. This second work in the animated VR series Invasion was directed by the creator of Madagascar, Eric Darnell who, with his team, cleverly integrates games into the narrative to create an interactive experience. Now it's up to you to remind them of what’s really important.

ASHES TO ASHES
2016, NETHERLANDS, 11 MIN
DIRECTION : INGEJAN LIGTHART SCHENK, JAMILLE VAN WIJNGAARDEN, STEYE HALLEMA
PRODUCTION : SUBMARINE CHANNEL IN COPRODUCTION WITH AVROTROS AND IN ASSOCIATION WITH JAUNTVR AND WEMAKEVR
Ashes to Ashes is a virtual reality tragicomedy about the way in which a family in conflict manages the last wishes of the deceased grandfather. Seen through the eyes of the dead man (the urn containing his ashes), this short film offers a unique view of relationships in a family about to implode. We see how each family member stops pretending and reveals the true extent of their dishonesty.

ALTERATION
2017, FRANCE, 18 MIN
DIRECTION : JÉRÔME BLANQUET
PRODUCTION : OKIO STUDIO / ARTE
Alexandro volunteers for an experiment to study dreams, but has no idea that his mind will be intruded on by Elsa, a form of artificial intelligence who will digitise and remove his subconscious in order to feed on it.